Turn your Smart Factory into a Clean Factory!

What you must not forget when using AGVs. 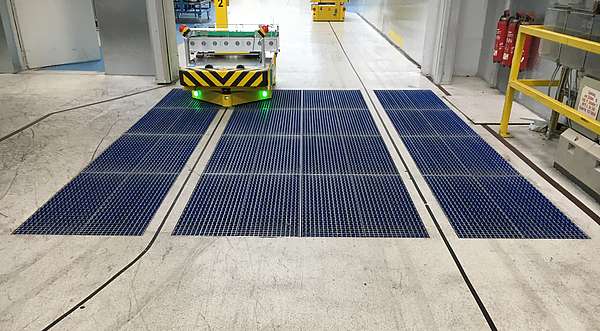 Industry 4.0 is nowadays the main buzzword for those responsible for business processes of any kind. Every company wants to arrive as quickly as possible in the future and the fourth industrial revolution. The desire for greater automation is leading to the increased use of driverless transport systems (DTS) in logistics. These bring many advantages for production. However, they also have disadvantages, such as the dirt they bring in on their routes. Despite current technology, this problem persists or even increases if no preventive measures are taken.

What is an driverless transport system (DTS)?

The entire system, for transport with automatically guided vehicles, consists of several components. These have been defined in VDI Guideline 2510 by the Association of German Engineers. A DTS always consists of:

Automated guided vehicles (AGVs), as the name implies, are automatically driven by their own traction drive and do not need to be touched to find their way. They are conveyors, they transport loads and move only on the ground. AGVs are divided into load-hauling AGVs (e.g. tractors & underride tractors) and load-bearing AGVs. The latter can be further subdivided into AGV with an active or FTF with a passive load suspension.
The master control system manages and controls the entire system. It takes over administrative tasks such as order planning, parking procedures, fleet management and route optimisation. Data transmission between the AGV and the control system (and partly also between the AGV and each other) can take place using different technologies:

However, it is becoming more and more critical that all tasks are performed by a central controller, as this often results in functionality and flexibility problems. In a joint project between OFFIS (Institute for Information Management e.V. / Germany) and IPH (Institute for Integrated Production Hannover / Germany), for example, an overall concept for a decentralised control of AGVs was developed as early as 2013.
To ensure that the AGV always finds the right way in a production environment, there are different types of navigation. The three main types are (1) guidelines, (2) grid navigation or (3) laser navigation. Outdoor navigation via GPS is also possible. Each type of navigation has advantages and disadvantages.

Orientation on the guidelines is carried out either via cameras and the recognition of colour contrasts, Hall sensors that localise magnetic fields or antennas that perceive alternating electric fields. The preparation of the guidelines is time-consuming and depends on the condition of the soil. Unfortunately, the optical guideline also presents a challenge in terms of rapid wear due to driving over and contamination. With inductive guidance, the AGV follows a stringline in the ground, which can also be used to transmit energy. The greatest disadvantage is considered to be the lack of flexibility, as only the existing track exists and there is no prompt possibility to react to changes in the warehouse environment. For grid navigation, transponders, magnets or optical grids (colour contrasts) are embedded in the ground. They also form guidelines, not continuously, but from point to point. This makes it easier to adapt the routes, since no completely new guideline has to be created, only the specifications within the grid. Although laser navigation is expensive to purchase, it offers the greatest flexibility in the event of changes in the warehouse environment. Reflector markers are attached to the edge of the path to which the laser scanner is oriented. In this navigation, however, care must be taken to ensure that the reflectors are not covered or damaged. 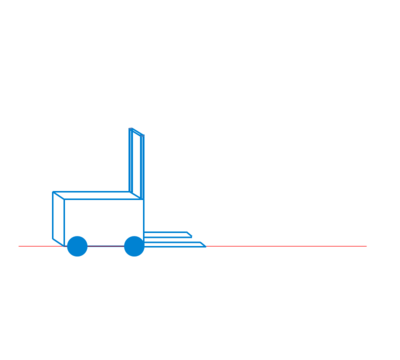 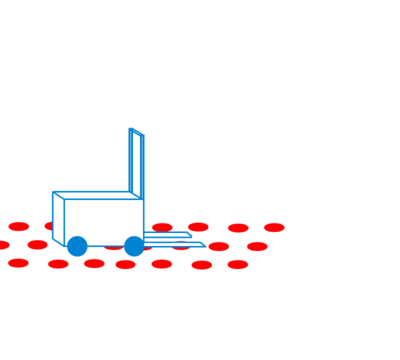 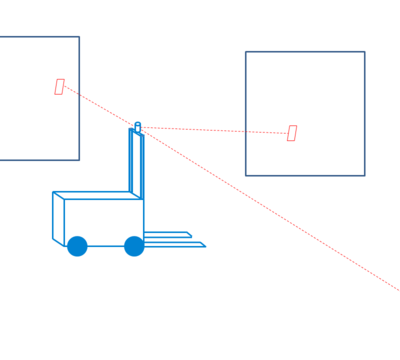 A Driverless Transport System (DTS) also includes consideration of the system's interfaces to the infrastructure and peripheral equipment such as doors & gates, fire doors and elevators. These requirements are also laid down in a guideline issued by the Association of German Engineers (VDI 2510 Part 3).

What does an DTS do?

DTS control the transport of different goods in a warehouse or production environment. Depending on the requirements, they can move loads with a few kilograms or loads with a weight of up to 50 tons (e.g. undercarriage tractors, heavy-duty AGVs). Their speed varies depending on the area of application. If there is passenger traffic, the specified speed is usually 1 m/s. In fully automated areas, the speed can be higher because the risk of accidents is lower.
Of course, the automation of transport routes has some advantages. Driverless transport vehicles are suitable for transporting different goods, depending on their type. They optimize and accelerate internal transport. This allows an increase in production to be achieved while at the same time reducing personnel costs. The error rate is reduced by DTS and permanent use, even around the clock, is possible. They can be easily integrated into existing structures and, depending on the control system, can also be adapted more or less well to changing conditions.

Which problem is often forgotten?

A problem that does not change even with driverless industrial trucks is the entry of dirt into the warehouse or production environment through the tires, rollers and wheels of the vehicles. By moving on the same lane, dirt is carried away, e.g. from logistics to the clean zones. This in turn leads to increased cleaning costs, possible contamination of products, surface contamination and, especially in the case of AGVs, to faster wear of guidelines or grids in the floor. In addition, roller abrasion is particularly noticeable in AGV lanes, especially in curves and also in shunting areas. The abrasion is increased by the always same track and the turning / manoeuvring of the vehicles on the always same places leads to punctual damages of the hall floor. 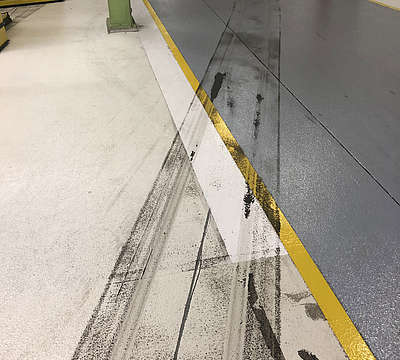 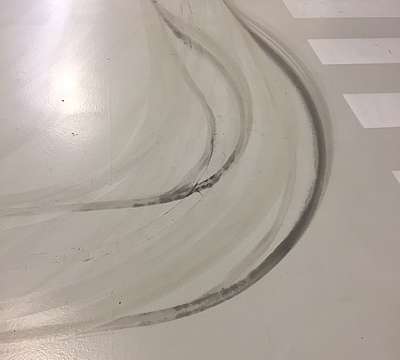 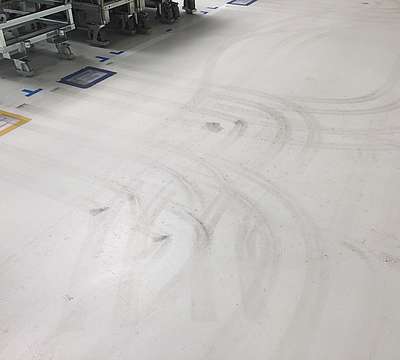 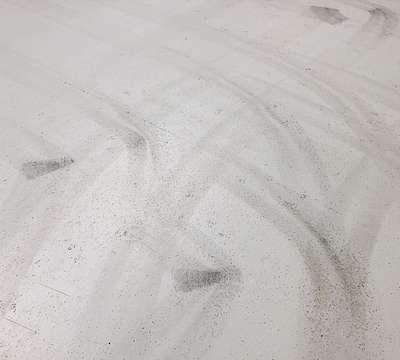 The solution is the ProfilGate® cleaning system, which can be integrated into the warehouse or production environment. It consists of segments composed of trays with grates. Brush strips are clamped in the grates and work actively through their pre-tensioning and the inclined arrangement of the bristles, purely mechanically. In this way they remove dirt from tires and soles. This falls through the grids into the trays and is collected there. The patented brush strips feature many construction details, such as the inclined bristles, the pre-tension, the roof and profile shape as well as specific material, which guarantee highly efficient functionality of the entire system. 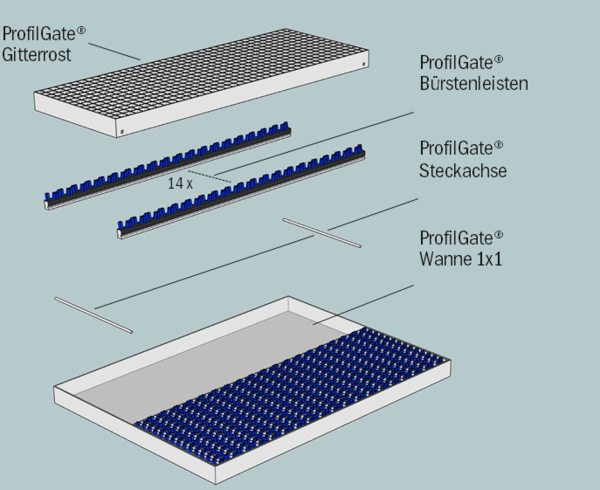 ProfilGate® is available in various versions for the different tire, wheel and roller sizes. The st series is used for driverless transport systems. It has fine-meshed grids for narrower rolls as well as high stability at high weights and is therefore the product for AGVs, but also the rolls of route trains, trolleys and hand trolleys are reliably cleaned here. The st series is ideal for indoor use  and narrow, hard rollers due to smooth grate surfaces.

If you need to meet the requirements of a hygiene concept, a sti series is also available. The difference is that the grates are made entirely of stainless steel.  This variant is often chosen in food processing because strict standards such as the IFS Food or the BRC Global Standard for Food Safety apply in this industry. 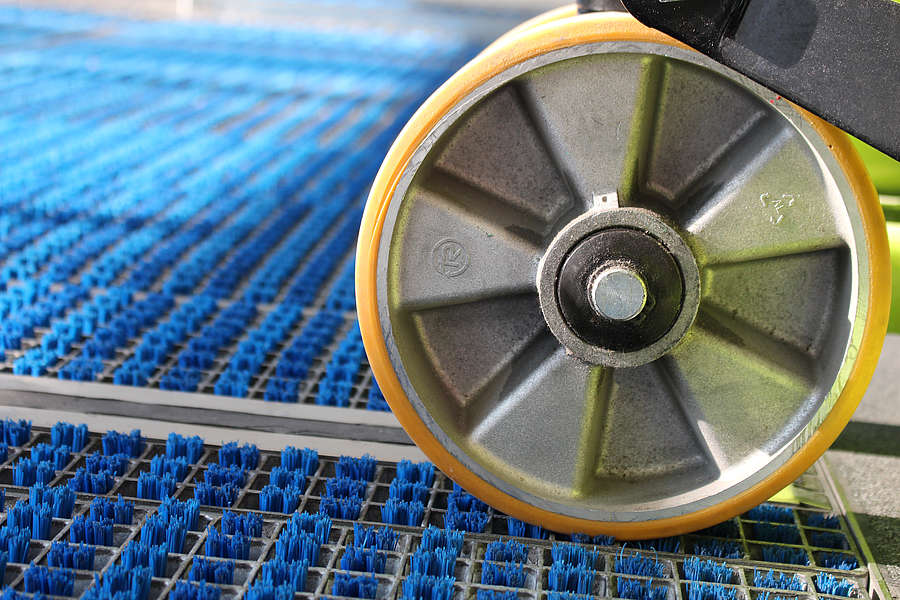 The ProfilGate® k series is also available for DTS. It offers fine-meshed and absolutely smooth plastic grates that ensure a smoother crossing. The plastic of the grates makes them particularly light, and they are also antibacterial and therefore even approved for the food industry.
The guidelines for DTS can either be placed between the trays or mounted on the grates with a DTS guide rail. This rail can also be retrofitted to existing fields. So if you are already using one of our cleaning fields or do not currently use any AGVs, you can be sure that this option is always available to you. The cleaning field can also be adapted with grid guidance. The division allows a grid point to be placed between the fields so that the driverless transport vehicle continues to receive the conductive impulse.

The advantages of ProfilGate® for DTS at a glance:

Call us and turn your Smart Factory into a Clean Factory! 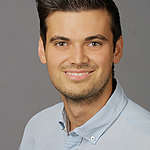